Part I — The Renewable Energy Future

Our goal in the clean energy industry is to decarbonize energy – fast. To do that, two things are required: zero-carbon electricity and a carbon-neutral chemical energy carrier. At Ideal Energy we have been working on the first requirement with solar photovoltaic (PV) installations and battery-energy storage systems for over a decade. Now we’re developing the second requirement, a fuel suited to all of the situations renewable electricity and batteries are not ideal for. The remaining 70–75% of our global carbon emissions will also have to be dealt with to completely decarbonize the world. Hydrogen offers a path to do that by addressing two problems: making the most of renewable energy and providing carbon-neutral fuels.

Getting More From Renewables – Hydrogen and Wind

Converting electricity into hydrogen (H2) via electrolysis has benefits those other solutions do not. Hydrogen is better for long-term storage than batteries. It can provide energy storage in any elevation or climate, unlike reservoirs. In addition, it can be used on site or transported to more distant power plants using existing infrastructure.

Hydrogen can be burned in a combined cycle gas turbine power plant modified for use with hydrogen instead of natural gas. Co-locating a gas turbine power plant near a wind farm would address the intermittent nature of wind power by providing dispatchable generation. Solar and wind are non-dispatchable, meaning they cannot be turned on at will. Gas turbine peaking power plants, powered by natural gas, are the most common choice for dispatchable generation today because they can power up or down quickly and cheaply. With renewable hydrogen, the same outcome can be achieved with a carbon-neutral fuel.

Hydrogen can also be converted back into electricity in a fuel cell, providing the same dispatchable generation capability without the inefficiencies or localized emissions of combustion. (Hydrogen fuel cells emit only water.) A French project, called MYRTE, has proven the viability of this approach. MYRTE uses solar energy to make renewable hydrogen which is stored on-site and fed into a fuel cell for grid stabilization. Renewables like wind and solar generate power intermittently. Sometimes they produce too little power, which is why most solar installations are grid-connected. Sometimes they produce too much power. Wind energy, in particular, often overproduces. Because the U.S. has substantial transmission line constraints, we cannot transmit excess wind power to distant load centers around the country. We have to transmit power to local load centers where supply may exceed demand.

There are several solutions for this problem. The most common is curtailment, or simply shutting wind turbines down whenever the power generated exceeds the demand. Another option is battery energy storage. Battery energy storage systems work very well when the stored energy will be used within a few hours or days, which is why we install these systems for many of our solar customers. Other options, like pumping water into uphill reservoirs and compressing air in underground tanks, have shown promise for long-term storage in certain situations.

Hydrogen in the Natural Gas Grid

It is also possible to inject hydrogen directly into the natural gas grid. A handful of research-scale projects at NREL and U.S. universities, as well as several dozen pilot projects in Europe, have proven the viability of this approach.

A 2017 joint project between Southern California Gas and University of California, Irvine uses a 60 kW PEM electrolyzer powered by the University’s solar array to produce hydrogen. The hydrogen is injected into the campus gas grid where it mixes with natural gas before being burned in the gas turbine power plant that powers the campus.

At the E.ON Falkenhagen project in Germany, built in 2013, a 400 MW wind farm powers 6 Hydrogenics alkaline electrolysis units with a total capacity of 2 MW. The resulting gas is mostly injected into Germany’s gas grid. Methanation capability was added to the facility 2018, allowing the system to create synthetic methane.

Injecting hydrogen into the natural gas grid presents some challenges. Hydrogen can be mixed with natural gas up to around 5–10% without issue. Beyond that point there are two problems: hotter flames and hydrogen embrittlement.

Hydrogen burns very hot. At concentrations above around 10% hydrogen, appliances would have be modified to account for the hotter flame, different flame geometry, and faster flame propagation.

Exposure to hydrogen causes hydrogen embrittlement of certain metals. Hydrogen embrittlement ultimately leads to fractures and failure of the metal. The mild steel used in our natural gas grid is particularly susceptible. At concentration above around 25% hydrogen, 316L stainless steel or other more exotic alloys would have to be used instead.

Replacing gas pipe and reengineering appliances are not practical at scale, so substituting hydrogen for natural gas is unlikely to exceed 5-10% in the grid. In dedicated applications, however, like industrial furnaces, peaking power plants, and combined heat and power plants, it may be practical to switch to higher concentrations of hydrogen or pure hydrogen.

Another option is producing synthetic methane, like in the E.ON Falkenhagen project. Renewable hydrogen is used for this process, as well. This reaction is similar to coal gasification in reverse – a catalyst causes hydrogen and either carbon dioxide or carbon monoxide to become methane and water. Methanation could be useful to produce carbon-neutral natural gas compatible with existing gas infrastructure. However, for methanation to work at a large scale, direct air capture of CO2 would have to become viable.

The Other 75% – Hydrogen and Ammonia

The other major benefit of hydrogen is that it can replace many of the fossil fuels we use today. It can be injected directly into the natural gas grid. It can be transported to large facilities for use in combined heat and power plants. It has industrial uses as an essential ingredient in refineries (including refining carbon-neutral biofuels). It can power fuel cells in heavy transport applications. Industrial furnaces and kilns can burn it. Perhaps most important in terms of clean energy, it is the principal ingredient in the manufacturing of ammonia.

Ammonia (NH3) is made from hydrogen and atmospheric nitrogen using an artificial nitrogen-fixing process called the Haber-Bosch process. Hydrogen catalyzes a reaction that converts atmospheric nitrogen into ammonia. This process is critical to modern agriculture. Approximately 88% of ammonia is used for fertilizer, mainly in the form of anhydrous ammonia. “One of the biggest carbon sources that we have to deal with is just merely producing ammonia, which is used broadly in Iowa for agriculture. Its global carbon footprint is on the order of 1-2%, depending on how you want to measure it, of the world carbon output,” said Wilson. “Just to make ammonia. It’s crazy. It’s a crazy number.”

The carbon is released when hydrogen is produced from fossil fuels. Using renewable hydrogen rather than hydrocarbon-sourced hydrogen would have a major impact on global carbon emissions.

Ammonia production represents a vast, existing market for renewable hydrogen. In this context, hydrogen is a commodity. Wind farm operators and utilities can sell any excess hydrogen they produce into the agrichemical market.

Ammonia can be stored and transported more easily than hydrogen. It requires less cooling to change to a liquid state. The larger ammonia molecule is less likely to dissipate and leak. Liquid ammonia has an energy density nearly double that of liquid hydrogen. Production and safe handling of ammonia is well understood and there is plenty of infrastructure to support its distribution and storage.

Many people hear hydrogen and think of the Hindenburg, but Dr. Wilson emphasized that hydrogen is safe. “We have 100 years of industrial and chemical experience with hydrogen,” he said. “It’s just one more risk to manage. Not unlike managing the risk from high voltage at a utility or solar company.”

Handling hydrogen in an industrial context is well understood. The U.S. Department of Energy [email protected] program devotes many resources to educating utilities and industry on hydrogen safety best practices.

For residential customers, the risk is virtually nonexistent. Research coming out of pilot projects in Germany indicates that hydrogen can be mixed to at least 10% with natural gas with no adverse consequences to equipment and no special knowledge needed by end-users.

Research-scale projects at NREL and commercial pilot projects in Europe show that renewable hydrogen technology works. The next step is a commercial-scale project in the Midwest using wind power to create hydrogen and ammonia for industrial and agricultural markets.With abundant wind energy resources and a huge demand for ammonia, Iowa is the ideal place to begin growing America’s hydrogen economy. Iowa generates 41.9% of its energy with wind – the highest percentage of any state in the nation – and is second only to Texas in total installed capacity with 10,664 megawatts (MW). Iowa is a major agricultural state with the highest corn production in the nation and the second highest soybean production. Iowa has a thriving biofuels industry and a large manufacturing sector – both of which use hydrogen extensively.“Hydrogen in the state of Iowa has the potential to kind of wake a bunch of people up to the fact that renewable energy is way more than just solar and wind providing electricity,” said Dr. Wilson. Dr. Wilson believes a commercial project in Iowa may be profitable right now based on the current cost of wind-generated electricity in the state and the current price of electrolyzers from companies like Nel and Hydrogenics. If so, a successful project here could spark a hydrogen rush throughout the Midwest.

The growth potential for the renewable hydrogen industry is hard to overstate. “The world has an existing market for very large volumes of H2 and ammonia and these markets will have to be supplied with new zero-carbon processes,” said Wilson. “Beyond this, the H2 market will grow substantially because H2 will increasingly be used for fuel for heavy, long-distance transport, both truck and rail.”

In Part II of our Renewable Hydrogen and the Future of Clean Energy series, we’ll review how hydrogen is made and pricing models in today’s market. 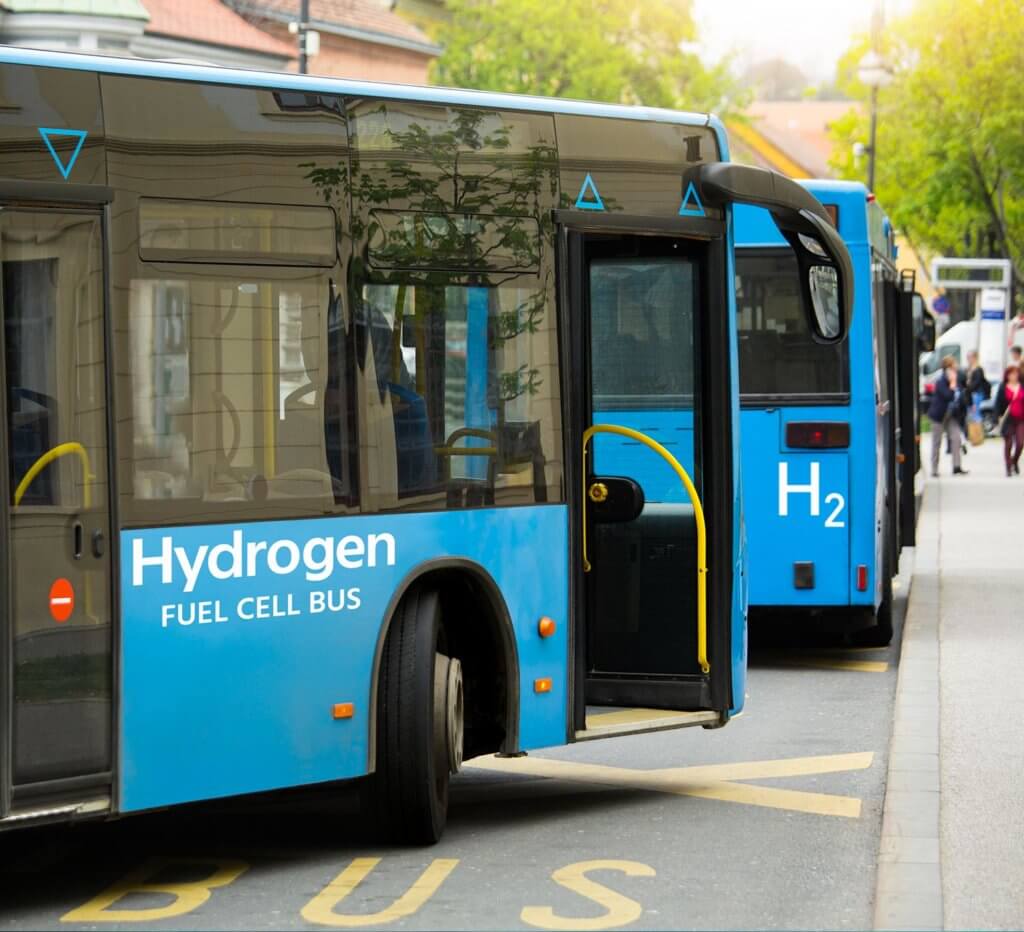 We need renewable hydrogen to fully decarbonize the global energy supply. Right now, hydrogen is sourced almost exclusively from fossil fuels. In this installment of our three-part hydrogen series, we're exploring what it will take to produce renewable hydrogen from clean electricity.